Elden Ring is the newest AAA title from the creators of legendary games such as Sekiro, Dark Souls, Bloodborne, and a lot more. Which have an enormous fanbase and a certain niche associated with them as being really hard games. These games come with a “Get Good” necessity with them and over time have amassed a huge player base as the satisfaction of accomplishment that comes from defeating a boss after hours of frustration is way too serene to miss out from. Dying is an integral part of Elden Ring and turning a 100 “you died” into 1 “Enemy Felled” is a massive selling point.
There has been a huge hype around the game since George RR Martin produced the game’s backstory and lore. Not just that but the game itself was shrouded in mystery and the huge potential that seemed to be associated with such an anticipated title.

Elden Ring will be a unique experience, especially for anyone who isn’t familiar with the Souls genre, and after a brief adjustment period where the sheer difficulty might make the players hate themselves forever playing the game the reality of the matter will present itself, that the difficulty of the game is what makes it every bit enjoyable. The game forces players to learn the mechanics without any form of a hand-holding but rather raw butt whooping. The massive open world presented to the player may seem overwhelming at first but the world is filled with so much organic exploration and content that players tend to lose themselves with exploration, fighting, random encounters, NPC questlines, and stunning visuals.

A tarnished in the land between where the ‘Elden Ring’ has been shattered and a select few hold the shards and in order to become the “Elden Lord,” you must beat the shard bearers. Although at first glance especially for players who aren’t familiar with the Souls formula the story might be a bit confusing as players progress they realize that the game is brim filled with interesting lore and almost every encounter has a certain story-driven element.

There are many different factions, you could align with a certain one and not even know about it and all of this affects the gameplay and even the ending. Elden ring has a nonlinear story and the choices players make such as helping an NPC or killing one will affect the storyline drastically and even have some parts of the open world inaccessible as certain encounters trigger the possibility of entering certain areas.

Elden ring doesn’t approach the graphics with a super realistic formula but rather the art style works very well with the setting of the game. The lighting works wonders and at many parts of the game, players will find themselves gawking at the sheer beauty that the world holds. There are bright grasslands, foggy swamps, creepy dungeons, floating cities, eerie ruins, tall mountains, and a lot more for the players to explore. The game has its fair share of visual wonders such that players will find it worthwhile to explore new places and dwell in the “lands between”. 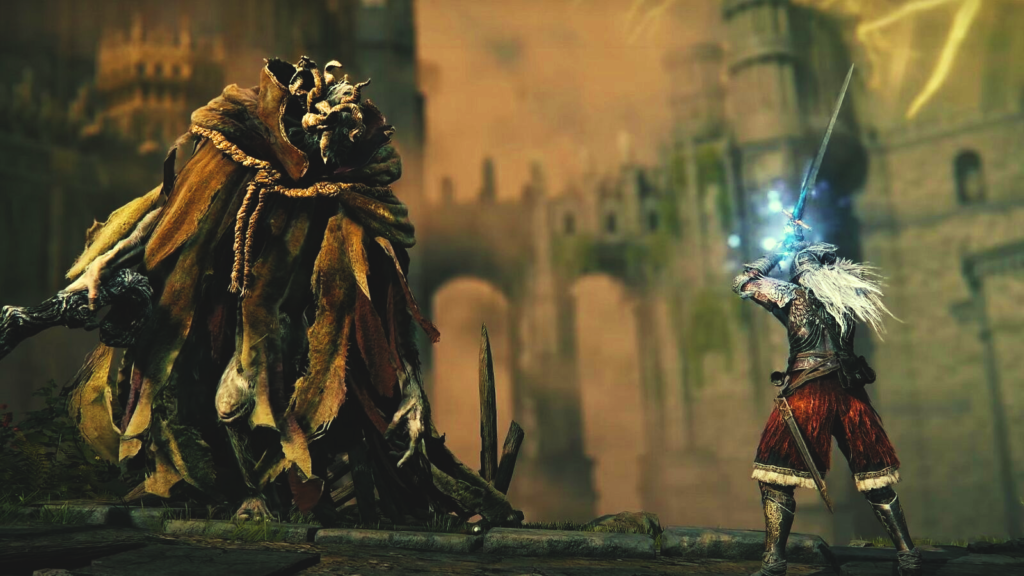 The game offers a solid character creator which may be overwhelming at first and the given classes that the game includes all have different gear and stats and the player can choose the kind of character they want to build. The progression system is fairly flexible and players will not be stuck with what they choose and can, later on, invest runes in the attributes they like and have a build that suits them.
The game has a multitude of quest lines associated with certain NPCs and a lot of them are optional but some are required to progress through the story, these characters are all very in-depth and have a significant amount of lore invested with them. The voice acting is great and really builds the atmosphere that the game is trying to sell, which is one department where the game truly shines. 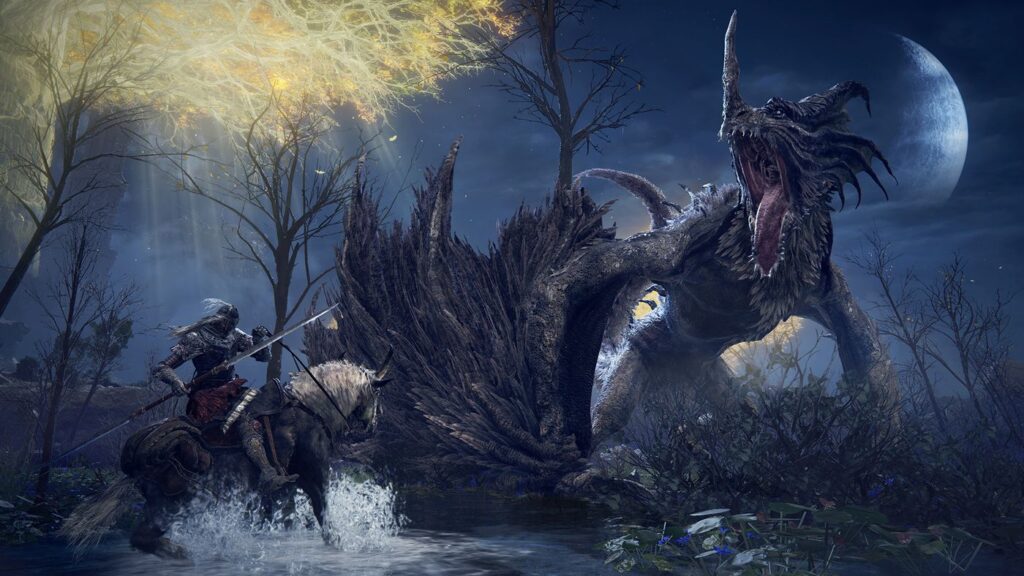 The core mechanics of the game are not different from the usual “From Software” tradition. It includes a light and heavy attack. A block and a roll. Even though the controls are fairly simple they do need timing and calculated use as button mashing and panic rolling are punished by almost every strong foe. The game includes a Mount which makes traversal fairly easy and faster as the open world is vast and treacherous.

Horseback battle is also implemented and even viable in many battles as some enemies can have mounts of their own. The game from the very first boss that the players encounter sends a solid message of “Get Good”. As new players will get easily obliterated in ruthless boss battles that easily one-shot you and have a variety of attack patterns that even change once you get them to half health. This makes every encounter unique and all the more satisfying to get through.

The music sets the mood for every fight as one just knows how a boss battle music slowly creeps up on players and they realize they are about to face a strong foe. Music in Elden ring does a phenomenal job of setting the correct vibe and even getting players ready for the fight to come. The music matches the theme and the atmosphere of the battle and the overall sound direction hits the mark. 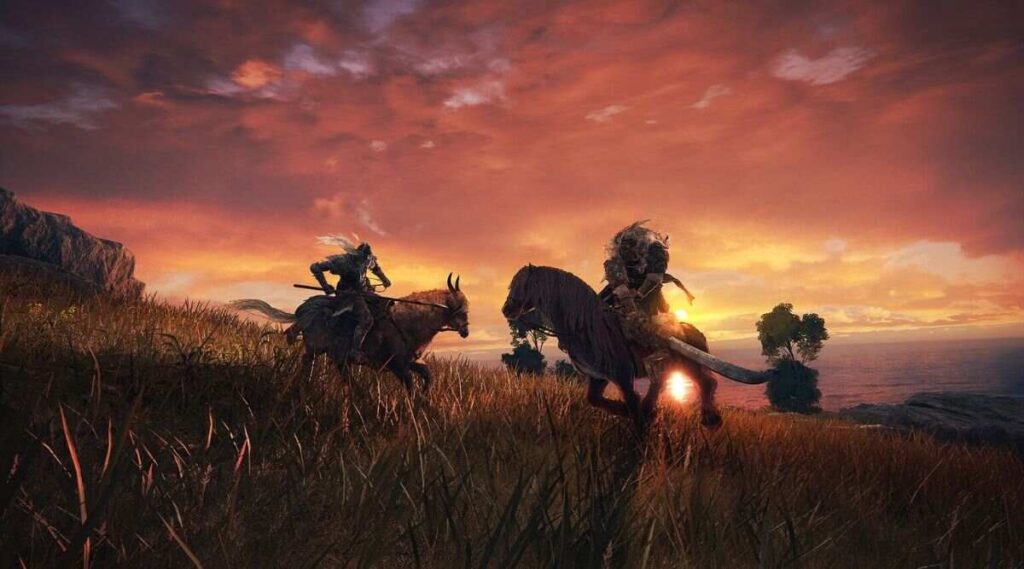 Lands Between has a number of varying biomes and each with unique places, atmospheres, enemies, and an overall aesthetic specific to each of those. The New World created here is filled with quests for players to do, to fight new and strong enemies, level up or die trying, help or kill NPCs, and a lot more. With stunning visuals, impressive landscapes, and gigantic boss battles that fill the players with excitement, remorse, and sometimes even frustration as boss battles can be very challenging, to say the least, but each has some puzzle element that players need to uncover to get the true essence of the game.

Elden Ring is a fantastic addition to the From Software fleet as it is appealing to both Souls veterans and newcomers to the genre as it is, to say the least, more accessible than its predecessors. The game has its fair share of challenges, epic moments, and a few challenges along the way. The multiplayer system is a little complicated at first as it requires an entire ritual to just try PVP or coop. Overall the game is a huge success with organic exploration, fantastic story, nonlinear story, and multiple endings. The replayability of this game is also great as players can choose different classes and builds which essentially change the way they play the game entirely. Thus increasing the value of the game significantly. The game gets 10/10 for being a unique experience and a worthwhile one at that.