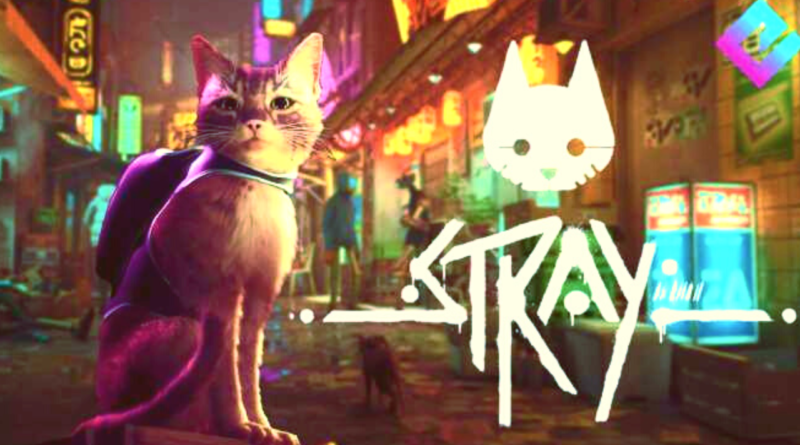 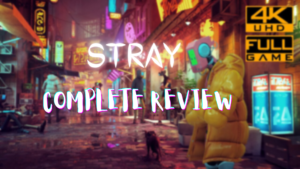 The latest adventure game developed by BlueTwelve Studio and published by Annapurna Interactive, Stray, was released in July 2022. This is one of the most anticipated and fresh games of the year. The story revolves around a stray cat that falls into a walled city populated by robots and machines. The game is available to play on PlayStation 4, PS5, and PC. Stray is an innovative game receiving positive responses from the players. Lets go through the stray review from gamereviwes team

Stray involves a silent protagonist, a cat, which is fairly something new and sounds innovative if done in the right way. The developers did a good job to extend the idea into a third-person adventure game in the form of Stray. Here the players take control of a cat throughout the game which falls into a walled city and takes on an interesting journey along with B-12, a floating robot, through the city populated with robots and other antagonistic machines. The game includes puzzle solving and moving around various areas in a town just like a stray cat would do in real life.

The players can traverse the environment by leaping across platforms and climbing up obstacles with the interactive button that prompts accordingly. Hence, it does not allow free movement rather some already set interactive obstacles and objects in the environment. Further, another aspect is puzzle solving which includes opening new paths and overturning obstacles. Optional activities include sleeping and meowing to an NPC. The companion, supporting the protagonist, is a B-12 floating robot that stores items, translates narrative, and helps in guiding the players. The game mainly includes evading the Sentinels’ line of sight and destroying the Zurks using a deflector. 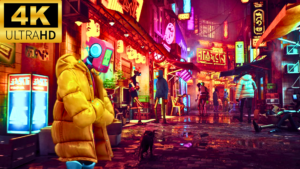 Stray is a game set amidst the detailed, neon-lit alleys of an underground city. It reminds me of Cyberpunk with elements of a dark-neon-themed environment. The developers present the indie game in a way where the players can see through a cat as the protagonist. Running the game on a PC is quite an easy task, as the minimum system requirements are quite low. The game is also available on the Playstation, where it can run on smooth 60 FPS at its highest resolution, in high graphics. In the case of a PC, it can cross 140 FPS at high settings on high-end PCs. The game supports ray tracing and without any ray tracing effects, it still looks amazing with spot-on screen space reflections and neon lights in the cybercity.

The game is easy to play with fair puzzle solving and an interactive world around the stray cat. Movement is easy and fluid although it does not allow the player as freely as an open-world game but with an interactive jump button when prompted. The usual controls include observing, sprinting, and interacting with the environment. The game allows an optional meowing button which is fun sometimes, meowing on an NPC can return a reply which moves the narrative of the story. The player can follow the neon signs in the city to reach the next path and ascend the story. Further the cat also uses the items and equipment from the B-12 robot using the selection controls.

Stray is a game, beautifully and put together. The relaxing genre with no abrupt gunfights and controller smashing makes it much more playable with a cat as a protagonist. The story is easy to finish with a five-hour-long story. The game looks beautiful with a neon-lit environment similar to Cyberpunk. The game is enjoyable with players hopping around rooftops and traversing through the alleys of the underground city. The robots and machines are quite fun to evade along with the destruction of the mutant with the help of items in the backpack. The much-awaited and anticipated game is quite well deserving and a recommended game to play. Finally, stray review end’s in a positive note from gamereviwes team.