The great big thing that I and probably many of us were waiting for is finally here. Yesterday AMD’s CEO Lisa Su officially announced the AMD RYZEN processor lineup. These processors are no joke. They are designed to compete with top of the line Intel core i7 processors, but at a much lower price.

This is the dawn of a new era for AMD, its not the same old power guzzlers any more, with the introduction of AMD RYZEN processor lineup they have jumped into the 14nm building process and as a result these are very power efficient and cool processors (Cool in both ways), such that their highest end model has only 95w max TDP. See, now we are taking business.

Let’s talk about the AMD RYZEN processor lineup in details.

All new RYZEN processors will feature Dual Channel DDR4 2400Mhz Memory on an AM4 Platform, with latest Motherboard partners already rolling out their top class X370 Chipset boards, AMD RYZENS’ are going to be fun. 24 PCI lanes, XFR (TURBO MODE), AMD Sense MI Tech, 8cores, 16Threads, and 20MB (L3+L2) Cache. One thing that I know is that the 1800X has 4.8 billion transistors featuring 200m of internal wiring. Mind blown. Every RYZEN comes with their own AMD WRAITH RGB Cooler. 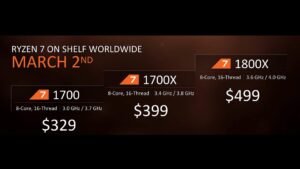 The RYZEN 1700 competes against the Intel’s i7 7700k and surpass it by quite some points. But this processors cost quite the same so, it would be fun to see how they perform practically instead of the synthetic benchmarks.

Moreover these RYZENs’ beat Intel i7s’ at Cinebench r15 nT, so real world performance is much anticipated once they come for testing at around March 2. But, no doubt these processors will give Intel a run for their money.

*This is only what the Sense MI tech implies to provide. I don’t know how much of it is implemented into the RYZENS.

Our rating of these processors based on the price point is 9.5/10